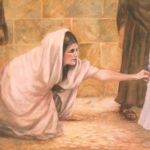 A large crowd followed Jesus and pressed upon him.  There was a woman afflicted with hemorrhages for twelve years. She had suffered greatly at the hands of many doctors and had spent all that she had. Yet she was not helped but only grew worse. She had heard about Jesus and came up behind him in the crowd and touched his cloak. She said, “If I but touch his clothes, I shall be cured.” Immediately her flow of blood dried up. She felt in her body that she was healed of her affliction. Jesus, aware at once that power had gone out from him, turned around in the crowd and asked, “Who has touched my clothes?” But his disciples said to Jesus, “You see how the crowd is pressing upon you, and yet you ask, ‘Who touched me?'” And he looked around to see who had done it. The woman, realizing what had happened to her, approached in fear and trembling. She fell down before Jesus and told him the whole truth. He said to her, “Daughter, your faith has saved you. Go in peace and be cured of your affliction.” (Mark 5:25-35)

Imagine yourself as this woman in the gospel this morning. For the last 12 years you have a bleeding hemorrhage. It is literally draining the life out of you. You are tired and week all the time and are not sure how much longer you can go on. You are not sure how you have come this far. You have been to several doctors who have attempted painful and intrusive procedures that have done more harm than good. You are unclean. You are not allowed to touch anyone or be touched by anyone, not even your husband, if indeed he is still even in the picture. Whenever someone comes within arm’s reach of you, you must shout “Unclean” as if you were a leper. You can’t remember the last time you had so much as a conversation with another human being. You are an outcast. You are lonely. You are in pain. You are exhausted. You are dying.

Has anyone here ever felt that way before? Is there an area of your life in which you feel that way now?

You hear Jesus is in town. Somehow that name brings hope to the hopeless. You think, “If only I can touch the tassel of his prayer shawl. I believe I can be healed.” You sneak up behind him. People are pressing against him. They are pressing against you. You are breaking the law. You could be stoned. You don’t care. If this doesn’t work, you might as well be dead. You see a break in the crowd and slip forward. You bend down and touch a tassel of his prayer shawl. Suddenly, Jesus stops and stands erect. Immediately, you slip back in the crowd.

“Who touched me?” Jesus asks. The disciples think he’s joking. They laugh. “Everyone.” They answer. “The whole crowd is pressing against you.” “No.” Jesus smiles. “Someone touched me. I felt the power of God flow through me.” He is looking straight at you. There is no hiding now. You come forward and tell Jesus everything. He looks at you with loving eyes and calls you daughter. “Your faith has healed you. Go in peace. You are well.”

Faith is not doing the right thing. The crowd was doing the right thing. They were following Jesus along. I’m sure some were reaching out and touching him so they could go home and say, “I touched Jesus.” But they hadn’t really touched Jesus. They just pressed their hand against him. Only one touched Jesus, and she was doing all the wrong things. Breaking the law. Pushing through the crowd even though she was unclean. But she knew in the depth of her spirit where God speaks to us, that if she touched the fringe of his garment, she would be healed. She followed that still small voice in simple trust and obedience at the risk of her life and she touched Jesus.

That is what faith is. Simple trust and obedience to the still, small voice of God deep in your spirit.

Mary Healy, professor of Sacred Scripture at Sacred Heart Major Seminar in reflecting on this passage tells the story of a Sikh woman from Punjab who had an abusive husband. As he was beating her she leapt from their balcony to escape him, and broke her back. She had been paralyzed for 12 years. She heard from friend that someone had been healed at a Catholic Retreat Center in Malabar. She traveled there and met with a Catholic priest. She told him her story, and the priest encouraged her to forgive her husband. That was not what she came for. But she asked him, “If I forgive my husband, will your Jesus heal me?” The priest answered honestly, “I don’t know, but if you want any peace in this life at all, you must forgive your husband.” The next day, a retreat speaker invited everyone to stand up and thank God for his goodness. The woman later told the priest what happened: “I thought to myself, I have so much to thank God for. I am alive, I have two sons who take care of me. I must praise God!” She stood, raised her hands to God, and was instantly and completely healed of her paralysis. The woman stayed at the retreat center for several months to go through RCIA. She and her sons were baptized. Healy, Mary. Gospel of Mark, The (Catholic Commentary on Sacred Scripture) (p. 108). Baker Book Group